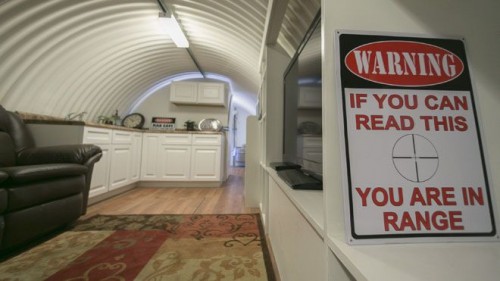 In this Monday, Aug, 12, 2013 photo, the interior of an Atlas Survival shelter made of galvanized corrugated pipe is showcased at the plant in Montebello, Calif. The City Council in Menifee in Riverside County has approved a controversial ordinance that will allow residents to build underground bunkers on their properties. Survivalist types spend big money on these state-of-the-art, luxury shelters. But city officials are concerned about toxins in the soil, earthquakes, structural stability and whether police and first responders will be safe responding to emergency calls coming from people hiding out underground. Plus, they say, underground rooms could conceal criminal activity, such as drug manufacturing. (AP Photo/Damian Dovarganes)