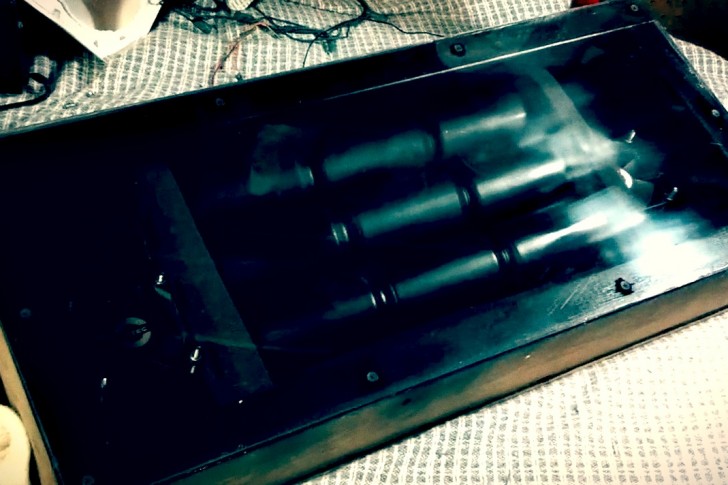 Using a few soda cans, some spare wood, some leftover plexiglass and a couple of old CPU fans – I made a miniature solar heater that is designed to sit in a window sill. This is a smaller version that I wanted to test out before building a larger 4×8 unit to do some real heating. The goal is to use the sun’s heat to warm up the aluminum cans and push the air out of the box to produce warmer results inside the room using the CPU fans. Now, these fans will not be pushing a ton of air obviously, but being that this unit can run on a solar panel, it’s all free.

First you just need to find enough spare wood to build your box. Do all of your measuring to make sure the box will accommodate the number of soda cans you plan on using – obviously, the more the better, but in this case I’m not building a large unit. Next, paint the inside flat black to absorb the most heat. Cut two holes, one for intake and the other for outtake. You’ll want to install your fans now and tidy up the wiring before you do anything else.

After that, you’ll want to start putting your cans together. First you’ll need to drill a 1″ hole in the bottoms and the tops of the cans. I’ve found the best method for doing that is reversing the drill and score it enough so that it just works loose. Once you have the bottoms and tops cut out, glue the cans together using some form of glue – I used Gorilla Glue. You will want to check the heat rating on the glue if you decide to use something different to make sure it can withstand the heat. Once you’ve let the glue set up, you’ll need to paint the rows of cans, then glue them inside the box for correct placement. The next part is installing the plexiglass. Some prefer to use regular glass, but I didn’t want to deal with cutting it and already had plexiglass on hand. I simply drilled pilot holes and used screws to fasten it – then sealed the edges with silicone.

After giving it a few hours to dry, it was ready to test out. I used one of those outdoor thermometers and placed it near the outtake to see what kind of temperatures I was getting after circulation of the air. I managed to get about a 30-40 degree difference from the air outside to the air exiting the unit. Ultimately these devices will be using the air inside the room and heating it, so it should perform more efficiently that way. As I mentioned, this particular build will run on a 7 watt solar panel easily in full sun. I plan on posting videos and build plans for the larger version sometime in the near future – I’m just trying to figure out the best cost effective way of building it. Meanwhile, check out the video below to see a recap on how I built it.