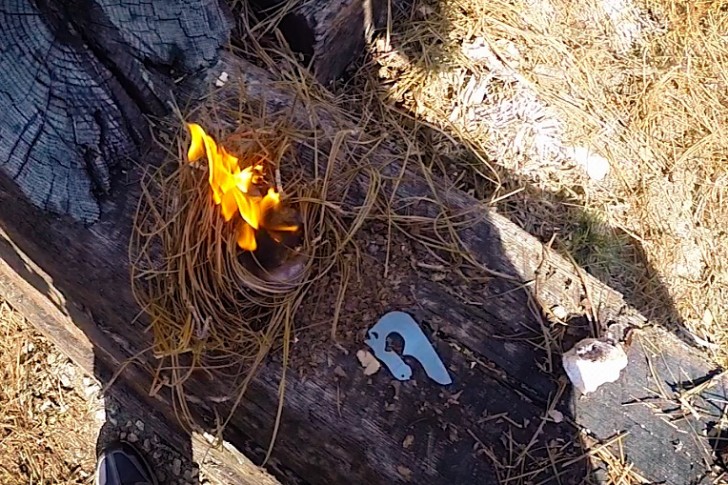 This is my first time starting a fire using flint and carbon steel. I’ll be the first to tell you that it takes a little practice to get a fire going using this method. You need a good piece of flint and a great striker. The Emberlit Strike-A-Light makes a very effective striker and comes in several cool designs – mine was in the shape of a horse. They can be used as a pendants or zipper pulls as well. It’s always important to learn how to start a fire in a more primitive way because you never know when your primary means of starting a fire may fail

I’ve found that you will have more success by having a good piece of flint to use. I have another fire starter that has a piece of flint attached to a handle, which makes it easy to strike. It helps to be able to strike the flint at an angle with the carbon steel to produce sparks. So if you plan on getting the Emberlit Strike-A-Light for your bug out bag, make sure you check out Amazon and look for some good flint.

The next thing you need is an altoids can or some device to store your striker, flint and tinder to keep everything dry. The altoids can is preferred because you can use it to make char cloth to serve as your tinder. You can also use dryer lint as tinder as I did in the video below. I can’t stress enough how important it is that you use char cloth or lint. It has to catch on fire with a spark, so you have to work with very small matter that will combust with ease. Char cloth is matter reduced to pure carbon by removing the oxygen. A small swatch of denim or cotton fabric makes great char cloth. Throw the fabric in the altoids can and cook it over a fire. Once the smoke starts dissipating, carefully remove the altoids can from the fire and let it cool to the touch before opening. That is hugely important. Don’t open it prematurely or it will allow oxygen to seep back into the cloth and combust. The fabric should look smut black and will be very delicate, so handle it with care. You can now use this to catch a spark very easily because it’s in a pure carbon form.

Have your tinder bundle ready to go and your char cloth in place inside the bundle then start striking the flint with your Emberlit Striker towards the cloth or lint. Some prefer to wrap the cloth around the end of the flint then strike the flint with hopes of catching the spark – it’s whatever you prefer and is easiest for you. Using the Emberlit Striker made the job really easy once I got the hang of it.

If you’re interested in the Emberlit Strike-A-Light, you can find it on Amazon.com or you can order directly from their website: http://emberlit.com.